A tipping point is a point in time at which a previous trend abruptly stops, changes direction or is greatly accelerated. In sociology, the term also describes the time when a group of people changes their behavior quickly and radically. The desired turnaround in mobility represents a tipping point as the current trend towards increasing motorization and CO2 emissions should be reversed by a change in mobility behavior.

Based on overarching transport policy objectives and climate targets, we investigate the way in which structural barriers suppress or delay opportunities for increased diffusion of goal-oriented measures to reverse trends.

Transition Processes in the Transport System

The current transport system favors the private car over other means of transport, its structures are oriented towards private cars. This “car-regime” inhibits the implementation of effective climate mitigation measures and ensures that even today, decision makers plan and finance infrastructures that lead to a drastic and continuous increase in CO2 emissions, both directly and through indirect and rebound effects.

Actors in this “car-regime”, such as policy makers or transport planners, are embedded in structures that allow different degrees of freedom for action. In the course of the project, five case studies of planning and decision-making processes for transport infrastructure in Austria were analyzed. The examples showed that different interests of actors result primarily from the different impacts of projects at local, regional and supra-regional level. Often, supra-regional economic considerations oppose local impacts. In this context, short-term economic aspects are considered more important than ecological sustainability and resource conservation. Long time delays between actions and impact reduce the willingness to inititate transformative processes. The structures of the political system are geared to slow change which makes far-reaching reforms difficult. There are some good individual approaches to design processes in transport planning and policy in a way to support measures that contribute to a sustainability transformation (“best” practice examples). However, these approaches must still be categorized as niche developments, e.g. policies of an individual city cannot create the necessary effect if the city is embedded in a metropolitan region that continues to be unsustainable as a whole.

Individual interpretation, prejudices, personal value attitudes, education, legal foundations (laws, rules and standards) and indicators determine the perceived reality and what is defined as a problem. Persistent pursuit of the “wrong” goals (speed, permanent capacity expansions, etc.) leads to increasing dependency of this “regulatory action” (“lock-in”). The necessary measures to decarbonize the transport system are known. Additionally, in this project, simulations of a CO2 tax and a change in awareness were carried out. These have shown once again that individual measures are not sufficient to realize a trend reversal. Instead, bundles of measures are needed that address different factors, such as price signals, supply improvements and an additional change in awareness. It also became clear that not only are there enormous deficits in the willingness and organizational power to implement measures as called for in the “Sachstandsbericht Mobilität” (Assessment Report Mobility) of Umweltbundesamt, but also – as could be shown with the CO2 tax scenario – that there is a lack of realistic assessment of measure intensity to come even close to achieving the climate targets in the transport sector. The measures already quantified should be implemented quickly. In addition, however, further measures focused on process structures must be pushed in order to initiate an actual transformation.

CHANGE! is a research project to develop a deeper understanding of possible and effective governance mechanisms for influencing mobility patterns. 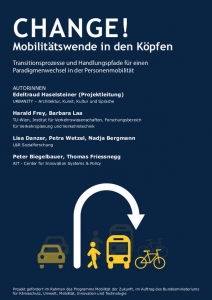 Summarized results for download in infographics and as a practical brochure 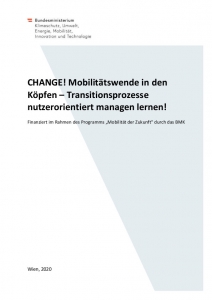 Final report of the project: CHANGE! Mobility change in the minds (pdf 4 MB)